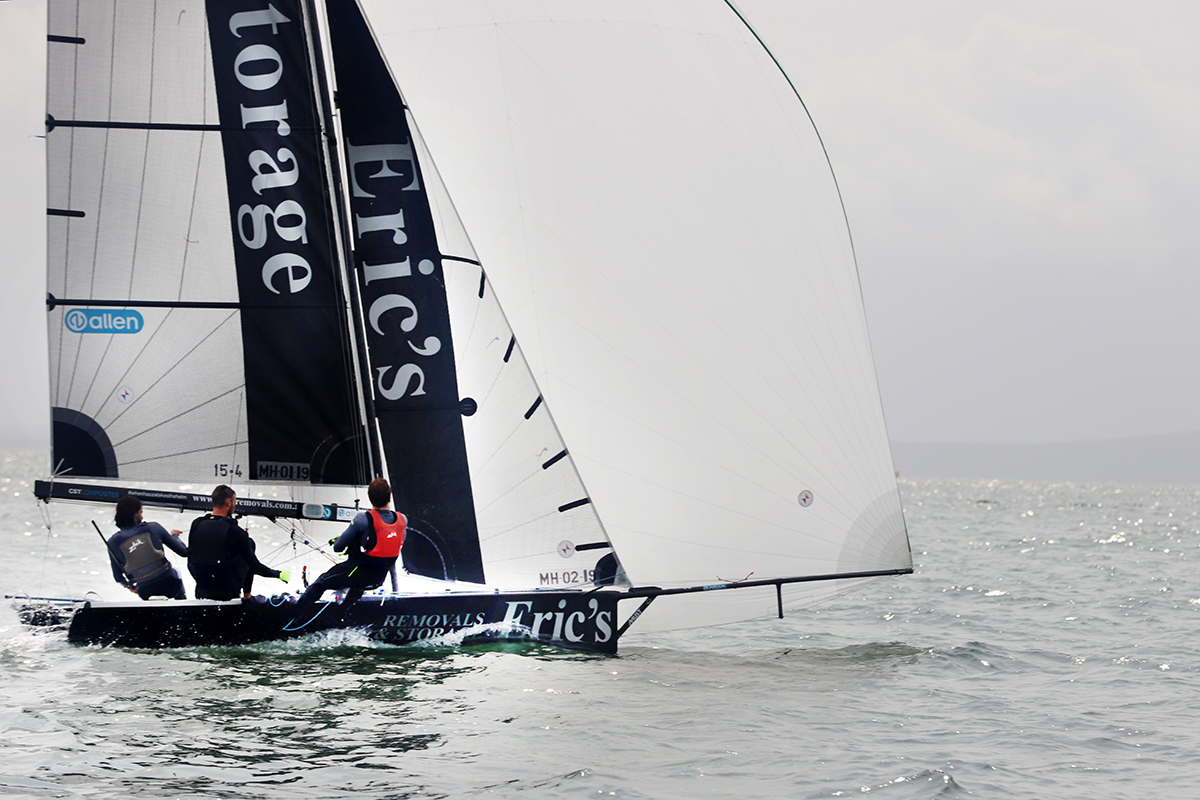 “You should’ve been here last week” was the locals’ retort today as the wind gods took a rare holiday at the tourist town of Port Stephens, leaving the Australian 16ft and 13ft Skiff Championship fleet to navigate their way through a vacillating east-sou’east breeze.

With two races sailed, it paid dividends for crews with light air guile as huge gains could be made by picking the pressure and shifts.

There was no better example than Race 3, where Harry Lawson piloted Eric’s Storage to commanding winning margin of 1 min 30 sec after posting a 34th placing in the earlier heat. The Middle Harbour team is known to be good in light airs, and for picking shifts, but few predicted such a dominant result in such a high-quality fleet.

“We knew we wanted the right-hand side, so we were intentionally late at the start – fifth row maybe,” Lawson explained. “We tacked out and just kept going right towards a cloud we could see.

“We stayed in pressure the whole work, and once we hit the front it was a lot easier.”

All the more remarkable, Eric’s Storage was still being screwed together 30 minutes before Race 2’s start, having destroyed its jib track and carbon mount in Race 1.

“The guys from Kammakazie burnt the midnight oil repairing the carbon section while Deck Hardware sourced a track from Sydney and had it delivered overnight,” Lawson added. “Our first race was a bit scrambled. We got ping-ponged by the fleet and learnt from that in the second race.”

First State Lending, helmed by Phil Bower with Shane McDonald and Richard Nardone, also cashed in with a stunning second place in the day’s opening race.

“It was a brilliant race. We started well and got among the leaders and found a few avenues to work our way to the lead,” Bower said. “Unfortunately, we couldn’t quite hold it to the finish.”

First State Lending has won a state heat at their co-home club of Illawarra, however it was their best nationals result to date. Race 3 saw them slip back to 37th, victims of the tide and light airs once back in the pack.

Ryan Wilmot’s Growthbuilt led early but slipped to 11th, expiring on the second work. It later made amends by finishing the next race in third, with Sutech Musto securing second.

“Any spot in the top five is gold because consistency is going to win this regatta,” he said. “We rounded the first mark in around 30th place but fought back. The split in the breeze was massive and we went right and made huge gains.”

A number of skiffs used the break between races to replace jibs and centreboards. The first race also had to be abandoned due to a wind shift, sending the fleet back for restart.

Having posted a DNF in the heavy-air Race 1, James Downey scored two firsts in the 13ft skiff titles aboard Bigfoot. He and Sam Skeen beat Nathan Lilley (Ebix) and Will Divola (Bruce) respectively.